Have you read about what’s been happening in North Carolina?  Solar panels cover a 35-acre field in Rowland, NC that once produced corn, tobacco and other crops. When the sun shines, the panels generate enough electricity for hundreds of homes. 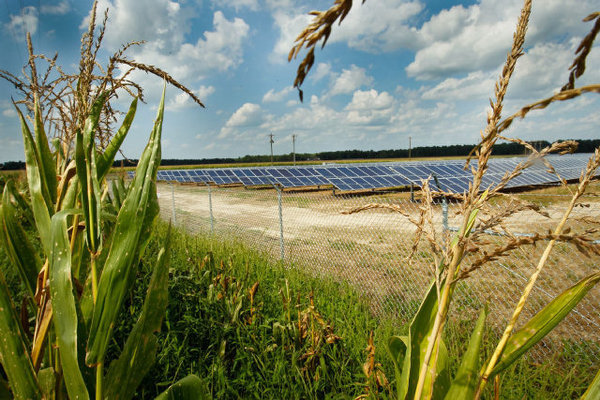 “I initially thought this was a pipe dream,” said farmer Billy Dean Hunt, recalling discussions with a solar company about using his cornfield for a sun farm. “But I started talking to them. They convinced me they would honor what they said. So I did it.”  Hunt, a 63 year old Marine Corps veteran says “It is guaranteed money. Farming is a risky business. If you can take some of the risk out and the liability, you are ahead of the ball game. If I die, my wife will have income because she couldn’t farm the land anymore.”In many cases, solar farms are replacing cropland that doesn’t generate enough income from traditional farming. Other times, solar farms are being placed on vacant industrial sites or land that hasn’t grown crops in years.Another reason for farmers to transition to solar is that the American farmer is graying.  The 2012 Census of Agriculture finds that the average age of a farm operator in 2012 was 58.3 years, an increase from 57.1 in the 2007 census and 50.5 in the 1982 census.  The study found one-third of all principal operators are at least 65 years old and that rural America has lost about 154,000 farm operators between the ages of 35 and 54 in the last five years.Unlike many other Southern states, North Carolina has encouraged the development of solar power through generous tax incentives and a state law requiring electric utilities to use some renewable energy.  In 2007,  North Carolina became the first state in the Southeast to adopt a Renewable Energy and Energy Efficiency Portfolio Standard (REPS).  This law requires investor-owned utilities in North Carolina to meet up to 12.5% of their energy needs through renewable energy resources or energy efficiency measures. Rural electric cooperatives and municipal electric suppliers are subject to a 10% REPS requirement.These policies are a key reason why North Carolina now ranks high in national rankings of solar-friendly states – and why solar farms are growing steadily.“This shows we are progressive,” said Thomas Parker, mayor of Laurinburg, whose community has a solar farm similar to the ones in nearby Rowland. “Any time we can add a dollar to the tax base, we are interested. I believe in it. I think this will be more prevalent in the future.”About 100 solar farms have registered to open since 2007, according to the N.C. Sustainable Energy Association, a group that tracks the solar energy business. Some of those may not have cranked up yet, but the association says the number of companies registering with the state gives an indication of the interest. Before the law was passed North Carolina didn’t have any solar farms, the association reports.